Since some of your asshole neighbors (or possibly even YOU yourself) want to put up Christmas lights in November, I decided to help out with the festivities. I don’t know about you, but I’m a pretty festive person… just not in the conventional way. This list involves some of my favorite things like horror movies, witchcraft, metal, and a demon who steals your kids (my Christmas sweater)! Let’s have ourselves a very UNHOLY CHRISTMAS.

First thing’s first, on Christmas Day there will be a New Moon in Capricorn with a peak at 9:12pm PST / 12:12am EST (ripe for a party/ritual). Whether you’re with family, friends, or spending the night alone — you need to catch the waves of this moon. This is the best time to ground yourself with your goals for the next year coming up and growing as a person. Capricorns are known for their ambitions, determination, and successes. If you have any Capricorn in your chart, you should utilize these inner-qualities for your own benefit. If you don’t, no worries! You can still call upon the energies of the New Capricorn Moon to help yourself as well. If you don’t know your chart, here’s a guide to help you!

You can’t (well I can’t) have a party or ritual without some good music. What’s more fitting for a New Moon in Capricorn on Christmas than some black fuckin’ metal? And what a title… ARKONA from Poland will be releasing their album Age of Capricorn on December 13th. This album is sooooo fucking good. I was just sent this album yesterday and it made sense to use it for such an occasion. This is some stellar black metal. I swear Zaala on drums has mechanical feet haha!

Formed in 1993, ARKONA is one of the forerunning and lead black metal acts to come from Poland, the band continually ascending to the next level with every album. The band now delivers the follow-up to their 2016-released Debemur Morti debut Lunaris with the frighteningly focused Age Of Capricorn, a razorwire blast of mesmerizing intensity. The band’s emphatic seventh album builds a new world from their distinctive sonic elements: nihilistic rage, strident power, masterfully integrated filmic orchestration, and vicious slabs of whiteout riffing where emotive melodies are beaten into corruption.

There’s just something about European Black Metal that just crushes all other attempts. I love a lot of Black Metal bands from all over but, it’s that extra element that makes it drip with unholy holiness. It’s a perfect mixture of “good and evil”, “God and The Devil” — or my favorite description — “a perfect balance between a church service and an exorcism”. This album embodies all of it.

Following intense touring surrounding their prior album, which saw them supporting the likes of Marduk, Batushka, and others, ARKONA is currently plotting new tour dates to support Age Of Capricorn. The band is confirmed to play Metalowa Wigilia 2019 alongside Sólstafir, Primordial, Carpathian Forest, and more on December 21st, and has already started confirming tour dates for the new year including Under The Black Sun Festival 2020 with Naglfar, Mystifier, Endezzma, and others on July 2nd. Watch for updates to post in the months ahead!

KRAMPUS THE CHRISTMAS SWEATER! (AND MORE)

This is legitimately my personal “Christmas sweater”. This is Krampus the Christmas Devil/Demon from European folklore who would either chase, or take bad children away to Hell. When I was living with a friend in San Francisco a couple years ago (LOVE YOU SASHA!!!) she randomly found this sweater in a thrift store and sent me a photo. I had to have it! Annnnd my birthday just passed, so, new sweater! I don’t know who gave this up, or why (bad break up maybe?) but thank you! I love this sweater to death. I had to figure out everything about it though. Who would make a sweater with a demon who’s stealing a kid (who seems to be pretty stoked about it)? Well! I found them in the… MIDDLE OF BEYOND.

This website… is insane!!! Sasha and I were going through everything that they had. Baphoment Ornaments, CTHUHLU Scarves, and a collection of sweaters I will never forget. It’s a mixture of metal, horror movies, and occult themes… everything I love. And right there, my Krampus sweater for $79.99!!! Again, who ever gave up this awesome sweater “THANKS!”. The ornaments are better priced, I definitely need to get some of them. Ehhh… I’d still probably get one of the sweaters. It’s too gold. They used to have a “FACE HUGGER SKI MASK” (from Alien the movie)… I wish I bought it (REGRETS!!!) 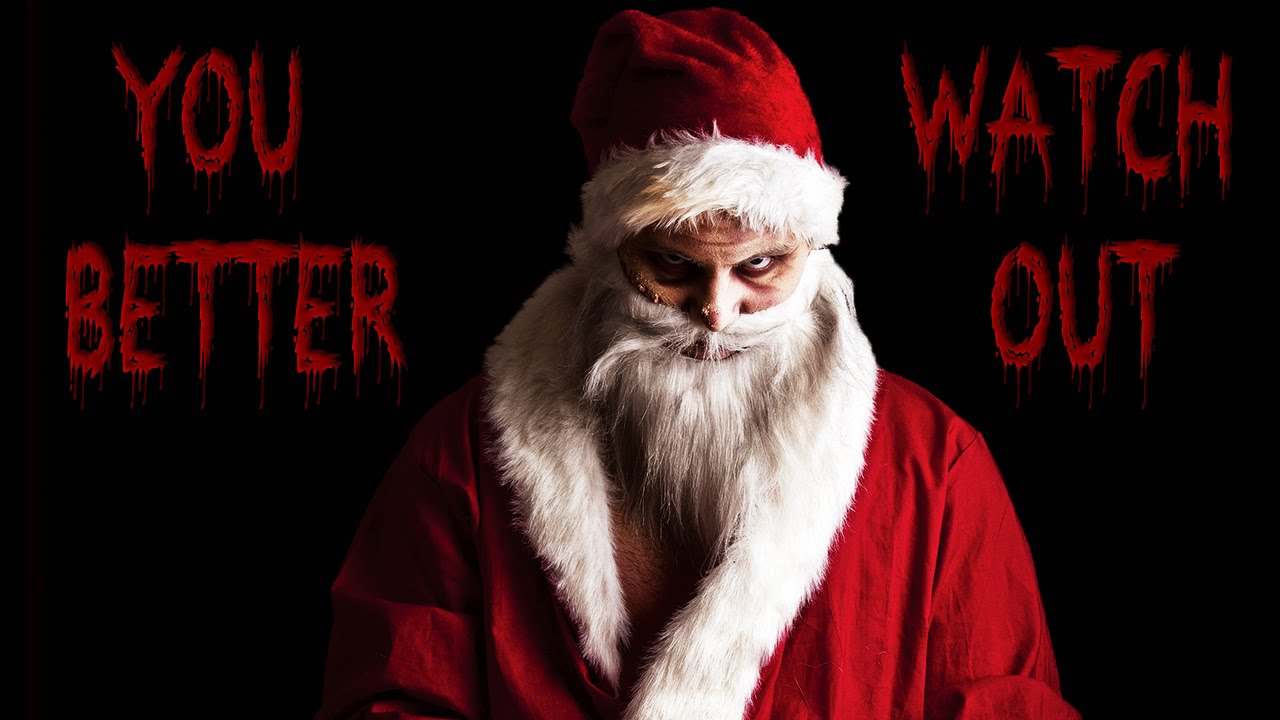 I can’t complete this post without adding my other most beloved element that I add to literally every holiday — horror films. Since my #Huluween marathon on Halloween, I’ve been checking out HULU for more of my horror needs. Right now, there are a few cool looking films on here. I have yet to see them since I’ll be watching them LIVE on another marathon via Instagram and giving reviews right after! But, maybe you should put these on your “to-watch” list for Christmas too (that way we can both be surprised).

Hulu Caption: After trapping what he believes to be the devil, a man caught in a spiral of paranoia, trauma, and evil unravels when his estranged family shows up for Chirstmas.

I’m having a hard time not watching this right now… looks freaky as fuck! Definitely going to watch that! Especially since it’s an IFC Midnight film — you know what that means #cinephile.

Hulu Caption: In pursuit of buried treasure, a group of fortune hunters unearth an ancient demonic summoning stone that holds a terrible curse and awakens a timeless evil, the Krampus. After centuries of slumber, Krampus has awoken with a thirst for blood.

It says it’s just horror, but I know I’m going to be rolling laughing at this. Every once in a while I like a bad horror movie. Either so bad it’s good, or so bad it’s cringe-worthy but somehow hilarious and entertaining.

Hulu Caption: Christmas is coming up, so a struggling actor gets a holiday job as a character in a plush suit to promote the hottest toy of the year, “Pooka”. At first it’s a fun and friendly distraction, but he slowly develops two personalities — one when he’s in the suit, and one that’s outside it — as Pooka slowly starts to take possession of him.

This movie was made by Blumhouse during their “Into The Dark” series on Hulu. A serious must-watch if it’s anything like the rest of the series!

Well there you have it. I’m going to have a very fun time come Christmas night with some hardcore eggnog and sage bundles. What kind of “unconventional ways” do you celebrate Christmas? Let us know at MFKNZINE@GMAIL.COM

Can ya guess which ones are for dogs? 🐕😏😈😂
Testing testing... 😆 I'm trying out a new path (well inching my way towards it) 👀🤪. I think I'd much rather be a photographer and videographer instead of having a regular shmegular jawb. I know, dumb idea right? Let's try it!!
Went and saw @jordanpeele's #NOPEmovie last night.... FUUUUCK I gotta see it again lol 😆 I can't wait for the day colleges around the world talk about this man -- this literal fucking genius -- in film history classes. I will re-enroll just so I can hear them talk about The Jordan Peele era. This is definitely his time right now. Killin the game 🎯 AND handing out Black History lessons. Ugh... It was worth the wait. The cinematography..... I need names. Lol 🤣🤣🤣
@safewordlosangeles will be having another event on July 23rd ⛓️❤️⛓️ The Last Supper
@fallujahsf X @scott_carstairs at Ozzfest Meets Knotfest 2017 😜📸
Book me for a shoot babe! 😈📸 @mfknmedia