Fire, hooks, and blood — this is just your typical girl’s night out with the Coven of Ashes. Earlier this year, I linked up with alternative model/Domme Luzia Lowe who then introduced me to her dark arts troupe… Coven of Ashes. This isn’t a “bloody burlesque” show; this is a real live blood ritual, every time. Coven of Ashes have been around for years gaining more interest with each performance. This September CoA was featured in Sadistik’s music video for “Kerosene Dreams”. And this coming Sunday, they’ll be paying homage to one of their greatest inspirations — Behemoth. I got a chance to speak with the amazing founder/creator of CoA Lauren Davis about their quest for feral femme power.

MFKN: What is CoA in a nutshell?

COA: Coven of Ashes is an all-female collaborative ritual performance project. We utilize a myriad of ritual knowledge, performing arts,  altered states of consciousness, bloodletting, flesh hook suspension, spoken word, adornment fabrication and any other concepts we may want to throw into the cauldron.

Our rituals vary from venerating and invoking blood goddesses, the divine and demonic feminine, embodying their archetypes, sanctifying our bodily autonomy, banishing negative societal stigmas, exploring our shadow/primal/feral selves and allowing persecuted women of the past possess us. We heavily connect with our blood (both veinal and vaginal), vulnerability, visceral pain and our need to manifest and transcend. 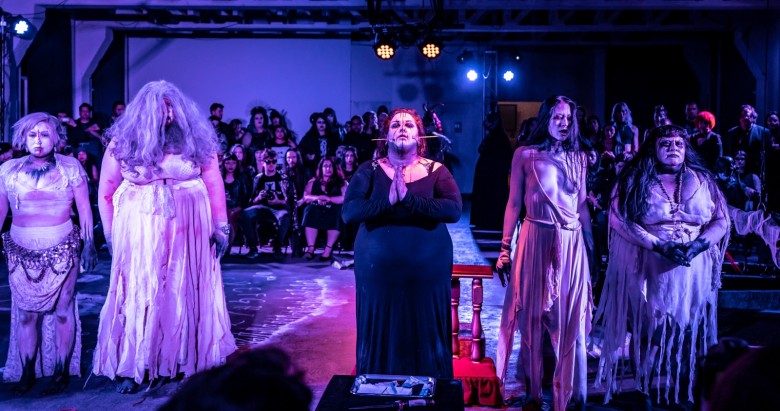 COA: We began performing in 2015 for a show dedicated to Women in Extreme Performance Art at the Black Castle in Los Angeles. The troupe created a Butoh performance in which we channeled women persecuted for witchcraft and invoked them to possess our bodies. We began as ash, rose through flame and were brought to trial where we admitted our guilt of sin with pride, bringing into creation Coven of Ashes. The show was more powerful than I had anticipated. We left the stage trembling, several people needed to leave to collect themselves. After that show, I felt like what we presented was bigger than ourselves and necessary to continue this work.

MFKN: Behemoth has been an inspiration to the LA alternative scene for a while. What is it about the band that CoA finds most inspiring?

COA: Coven always strives to bring the primal shadow self to the surface. We believe that through our vulnerable and cathartic performances, beauty can still be found. Behemoth is a pioneer in bringing fine art,  occult aesthetics and fusing them with the brutal roots of extreme metal. This mirrors our process of performing our primal rituals with a refined, artistic aesthetic. The energy of Behemoth’s music allows us to enter altered states and transcend the physical plane.

MFKN: What can patrons expect to see at the ‘Thou Art Darkest’ show this Sunday?

COA: There will be blood. 😉 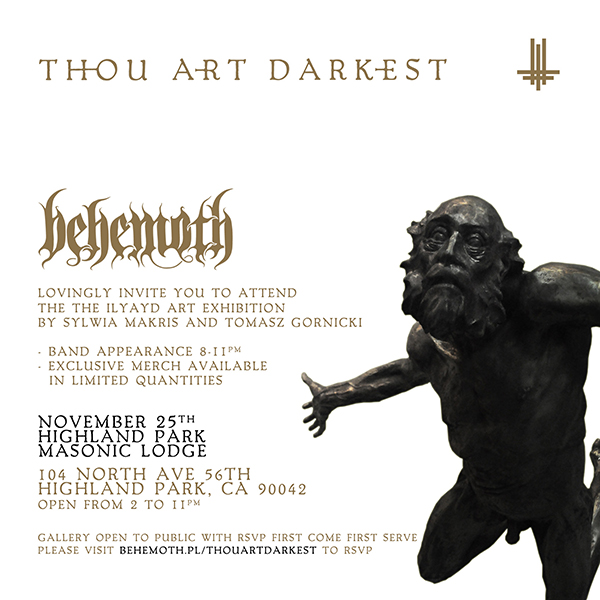 Sounds like fun! The ‘Thou Art Darkest’ art exhibit featuring works from Sylwia Makris and Tomasz Goornicki will be shown at Lodge Room located at: 104 N. Ave 56, Los Angeles from 2-11pm. Behemoth will be making a very special appearance from 8-11pm. And here’s the kicker… it’s FREE. You just need to RSVP HERE.

If you’d like to follow Coven of Ashes, get future show info or purchase merch, please visit: