Lzzy Hale is my personal hero for this interview alone. It’s happened to all women in the metal music industry. You’re there to work, with the band, or better yet… you’re IN the band. Instead you’re mistaken for a random fan, someone’s girlfriend, or even worse… a backstage “party girl”. If I didn’t have my giant camera in my hand I’d have a pretty tough time talking to security in a loud atmosphere. In this interview, Lzzy talks about the not-so-hidden barriers about being a female-fronted band and dismembering the phrase “you can’t do this because you’re a girl”. 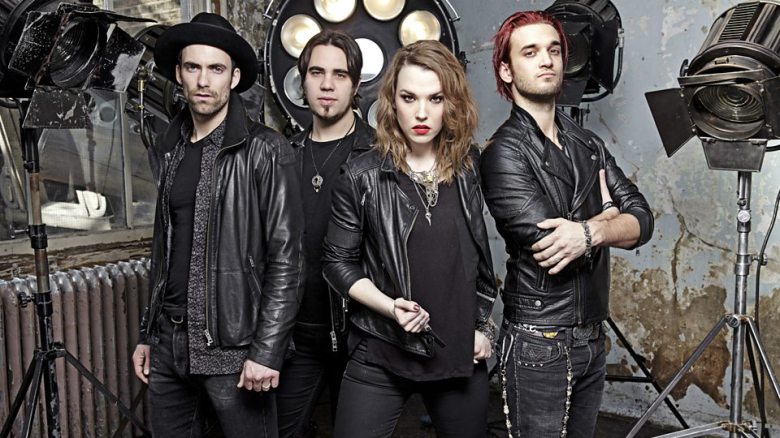 “In my personal experience, there was kind of an evolution in awareness of the difference between carving your own path if you’re a girl and carving your own path if you’re a guy. And I think that, in the beginning, my childhood naïveté actually played an important role, because I’ve had blinders on for the majority of my young adult life when we started the band. I grew up in a household where it wasn’t even really discussed — that, ‘Oh, yeah, when you get into the real word, there are gonna be some people that think you can’t do this because you’re a girl.’ I just kind of did it anyway. And then you get to the point where you’re talking to industry people, [people who work in] radio, and you get people, over and over again, telling you, ‘Well, we love what you do, we think you’re talented, but we don’t know what to do with you.’ And, of course, I would try and be, like, ‘Well, that’s ridiculous. Why?’ And most of ’em gave me the same answer: ‘Girls in rock aren’t really a good selling point.’ And if you do get on a radio station, if there is already a girl-fronted band going on, on their list, you’re gonna have a difficult time getting in that spot ’cause they’ve already filled what this guy ended up saying was the ‘novelty slot.’ And, of course, then you kind of have almost a defiance about it and be, like, ‘Well, that’s absolutely ridiculous. I’m gonna do it anyway.’ So you keep kind of pushing forward.”

“Now it’s really wonderful to kind of be on this other end where when I do go to a show, nobody just assumes that I’m the girlfriend, or, ‘Hey, the merch table is over there.’ I don’t get that anymore. But being on this [current U.S.] tour with Maria Brink from IN THIS MOMENT and Ash Costello from NEW YEARS DAY, we didn’t realize how important this tour was until we we started touring on it. And just to see these women in the crowd… Usually, it’s, like, 60-40 male-female [split], and on this tour it has completely flipped to the point where more girls are buying tickets for the hard rock show than the guys are. Which is amazing, because what you’re seeing firsthand from the stage is all these women making all of these heavy moments and owning them, and so we’re kind of proving, or at least seeing firsthand, that music is completely genderless and colorless and it’s free. And it’s really neat to see all that happening and just be a part of that and be able to stand on a stage and be, like, ‘Look, next time somebody tells you you can’t because you’re a girl, you come and talk to me.’ [Laughs] So it’s neat to be on that side of it as well.”

HALESTORM‘s fourth album, “Vicious”, will be released tomorrow on July 27 via Atlantic!